Why This Marketing Professional is Changing the Name of Her Book 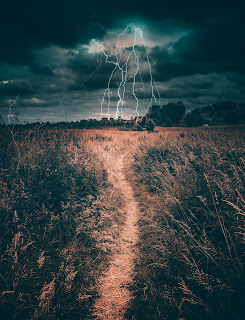 I have called the novel I've been working on THE BINDING OF SAINT BARBARA for ten years now, but from this point on I will refer to it as THE LIGHTNING IN HER VEINS.

There are two main reasons I decided to change the title. The first is that my original manuscript made use of Saint Barbara far more than it does now after making so many changes and cutting out so many perspectives, but the main reason is that The Binding of Saint Barbara is not a good book title and here's why: It doesn't tell us anything about the main character or the story or the elements of the story. It doesn't even suggest to what it might be about and the guesses people might make would be completely off.

So why is THE LIGHTNING IN HER VEINS better?

It tells us quite a few things in a very compelling way. First off, it tells us the main character is a female. It's clearly dramatic and suggests a dramatic story. It's also mysterious and makes us want to find out what it all means. Finally, it's a metaphor that brings up strong images using dynamic word choices.

From an author and marketing standpoint, I feel like this title not only better reflects the story in its updated form but also serves as a better piece of bait for prospective readers looking into a new book.

What do you think?

Inspired by the true story of the first death by electrocution, THE LIGHTNING IN HER VEINS tells the controversial story through the eyes of Charlotte Durston, the warden's daughter who lived in Auburn Prison during the year William Kemmler awaited his death in 1890.

If Charlotte ever wants to escape her existence as a cloistered child who picks at her nails and spends all day reading books and fantasizing about the real world, she has to prove she is responsible enough to attend college. Though, secretly she really wants to capture the attention of the love of her life, a prison guard named Daniel McNaughton. However, Charlotte can't seem to do anything right as if something was wrong with her, but she just doesn't know what.

Finally, she has her chance when her mother takes her to minister to the condemned prisoner, whose keeper is her favorite guard, but the moment she gets too close, the murderer attacks and attempts to strangle her to death. Humiliated and defeated before her crush and her parents, Charlotte doesn't want to give up, but strange visions of lightning terrorize her in her sleep and in her waking life. Something is wrong with her but everyone else seems to think she should just forgive and forget.

Unable to re-visit her attacker but still determined to prove herself, Charlotte sneaks behind her father's back and continues to visit the prisoners. She meets a young inmate named Bradley Cooper who shows her the respect she’s longed for her entire life. However, when he reveals a terrible secret, Charlotte must face her worst nightmares and uncover the truth about herself if she ever wants to escape the walls of her home and the prison within herself.
THE LIGHTNING IN HER VEINS mesmerizes readers by interweaving history with magical realism to explore the rigors of trauma and the journey of recovery.