Why Did the Writer Do That? A Behind the Scenes Interview with Jennifer Kincheloe

After You Read (SPOILER ALERT!!! Come back after you read the book!)
I'm so excited to be doing this unique interview with Jennifer Kencheloe on her new book  The Woman in the Camphor Trunk (Amazon). (Audible), the second installment of the Anna Blanc Series.

Most interviews are careful not to divulge anything before the reader actually reads the book but this interview is different. I wanted to really get behind the scenes and find out the knitty-gritty writing decisions behind this fun mystery. These are the questions I wanted answers to while reading the book and I hope some of them line up with your own. Enjoy!

How did you go about researching and describing details for things like Anna Blanc’s expensive furniture and clothing and that first Chinatown scene, which was filled with impeccable sensory details? 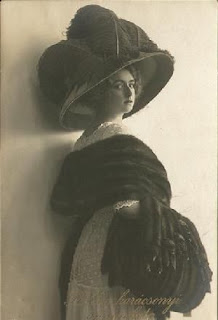 I rely heavily on photographs from the time and have collected thousands of them on Pinterest. One of my pages has over 4,000 pictures of dresses from the 1900s. I’ve got one of purses, one of furniture, one of hair. I’ve got street scenes from Los Angeles, and a board dedicated just to Chinatown. That first Chinatown scene, in the market, it’s straight from a photograph.

The various crimes and crime scenes? Are they all based on historical crimes or are they fictional?

The crime scene was historical. I managed to find a picture of the apartment where the trunk was found. I had to fill in the blanks and imagine some of the details – like the state of the corpse. But the trunk, the multiple pictures of her lover with white women, all historical.

The police matron bloomers Anna designed, were those based on something real?

I based them on a women’s magazine article from 1908 about camping. The 1900s was considered “the golden age of hiking.” The article recommended pants like the ones I described, to be worn under a slit skirt. So, I just modeled Anna’s pants after the picture, using some of the actual description from the article, them embellished them with frills. And of course, Paul Poiret introduced his harem pants shortly thereafter, though Arab women had been rocking them for years. 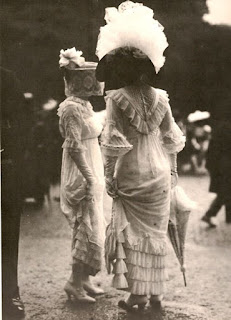 Both Anna Blanc books are filled with awesome period dialogue – what’s your secret?

I read things written during the period, like novels, eyewitness accounts, magazines, short stories, cartoons, books by humorists, and of course the newspapers. I harvested slang. Then I made a pass through the book and stuck it in wherever I could. Also, the Historical Dictionary of American Slang is great for checking when words first appeared in print.

Wear did you uncover the word “Frillies” which was used to describe both jewelry and underwear. Did I spell that right? I listened to the audiobook, lol!

I got it from a history book dedicated exclusively to underwear 😊

What has reader response to Jupiter! And other exclamations?

Anna’s slang has been warmly received.

Let’s Start the Interrogation & Get into the Author’s Mind
We start out with Anna’s father having kicked her out, but he sent her all of her extremely expensive belongings – dresses, shoes, a piano, etc. He could have kicked her out with nothing, so what was behind that decision as the author?

Anna’s father loves her, in his way. He gives her most of her dead mother’s heirlooms. But he doesn’t love her enough to give her the expensive jewelry. Plus, he needs the money.

It’s revealed early on that Anna has turned down Joe Singer’s proposal, which leads to a rift in their relationship – why did you decide to split them up again?

Before Anna took control of her life, marriage seemed her best option. The liberated Anna wants to remain in control of her life. It seemed natural that she would be hesitant to marry. Women really did become their husband’s property.

Why not show the scene in the church when Anna and Joe almost kiss? It was only revealed through Anna’s reflection of it – why was that?

Because I liked the last sentence of that scene. I thought showing the priest storming in would destroy the romance of it. 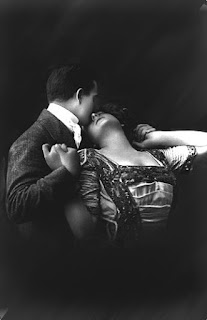 Anna has some of the most unique tastes for a historical character: whiskey, kippers, cracker jacks? What led to this?

She likes whiskey because she used to raid her father’s decanters. Kippers are a traditional English breakfast food, and Anna’s mother was English. The other fine foods she ate, prepared by her father’s cook, she no longer has access to. She has no culinary skills, and Cracker Jacks are easy and delicious.

During the infamous honey scene, there is a sudden perspective change from Anna to Joe Singer – POV changes can be hard to detect especially when listening to the audio as I was, but it seems like that was the one and only time you did that … is that the case and if so, why?

I broke the rules. I did it in book one also. Joe got one POV scene. I like him to make an appearance in that way.

Religious tolerance is an interesting facet of this book. For example, in one scene Anna prays to Chinese gods for the people in Chinatown, and at another point she burns a Chinese gambling charm. Yet, as a Catholic, she also criticizes Protestantism: for example when they save one of the Sing-Song girls, she says: “Well she isn’t really free, is she? Now she has to be a Presbyterian.” As a Protestant myself, I have to say I love that line. This theme is handled with grace and fantastic comic effect, but can you speak a little on the significant of this thread in the second Anna Blanc installment?

I was raised Presbyterian, so I think I can get away with lovingly, and hopefully with humor, shining a light on not-so-great aspects of the faith. There was a real Presbyterian missionary, Donaldina Cameron, who risked her life again and again to rescue sing song girls from the tongs. Reportedly, my great aunt Betty helped her. Donaldina educated the Chinese girls, taught them English, and when they were grown (many of them were just children) matched them with Christian Chinese men. But I imagine it was a dilemma for those girls who were forced to give up their culture and their own belief systems.

My father was Catholic, so I went to Catholic schools. I studied spiritual direction with the Benedictine nuns. Religion really interests me. If you look at Anna’s spirituality, it’s shallow, legalistic, fear based. She tries to manipulate God and the saints and see what she can get away with. It’s a commentary on the worst of American spirituality today. Also, Anna is straining against this understanding of faith. She challenges conventional thought. Her praying to the Chinese Gods was an attempt to show that—it demonstrates respect for the Chinese, and an openness.

How Did You Get Away with It?

How did you keep the audience from figuring out who dunnit?

How do you keep Anna’s antics balanced with the time period and women of the period so that it’s still believable?

Women of the period were exactly like women today, only more oppressed. They were sexual, rebellious, intelligent, driven, and ambitious. They were scientists, inventors, detectives, artists, and especially activists. The politics of the Progressive Era were largely shaped by the agenda of women. They fought for the eight hours workday, ended child labor, reformed prisons and jails, got the vote, and (for better or for worse) got Prohibition passed. The famous temperance crusader, Carrie Nation, used to bring her ax into saloons and chop up the furniture. True, women are largely left out of history books, which favor white men, but that doesn’t mean they weren’t achieving amazing things.

What’s with the naughty missionaries? From promiscuity to outright murder - did you come up with that because they are less likely to be suspected by the audience or is it based in truth?

The two-timing missionary is 100 percent historical. Her name was Elisie Sigel, age 19. She ministered in New York’s Chinatown and had two Chinese lovers at once. Big mistake. She ended up dead in a trunk in the apartment of one of her lovers. He disappeared, launching an international and unsuccessful man hunt. Technically, the police never solved the case.

But if you look at crime and sin, there really isn’t a group of people immune from it. This is also a commentary on religious leaders today, who sorely try my patience. Not because they sin, but because they pretend that they sin less than the rest of us. I work for the Sheriff Department, and ministers are one of the biggest sources of contraband in the jails. They can make a lot of money smuggling in drugs or tobacco. And they do.

No doubt, plenty of missionaries have struggled with jealousy. It’s Miss Robins daring pragmatism that is her downfall—the very qualities that allowed her to work in Chinatown in the first place.

What are you working on now? What’s next for Anna Blanc?

I’ve got a contract for book three in the Anna Blanc mystery series, which I’ve tentatively entitled Griffith Park. It’s also based on real Los Angeles History and will be in stores in Spring, 2019. It’s about a mysterious man who shows up in Anna’s life, the murder of a young man, and a “white slavery” ring. While prostitution was legal, it wasn’t legal to exploit under age girls IF you corrupted them. If they previously had a bad reputation, exploit away. This exploitation was called white slavery. 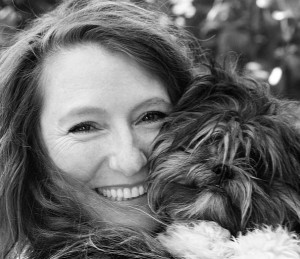 Jennifer grew up in Southern California, but has traveled to such places as Nicaragua, Ethiopia, and Papua New Guinea. She's been a block layer, a nurse's aid, a fragrance model, and on the research faculty at UCLA, where she spent 11 years conducting studies to inform health policy. Jennifer currently lives in Denver, Colorado with her husband and two teenagers, two dogs, and a cat. There she conducts research on the jails.
Visit Jennifer at www.jenniferkincheloe.com or on Twitter - Pinterest or Facebook

About The Woman in the Camphor Trunk 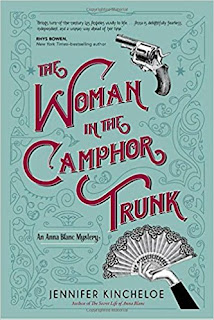 In early-1900s Los Angeles-- an era of courting, ragtime, suffragettes, and widespread corruption-- a socialite turned police matron tracks down the murderer of a white woman in Chinatown, while trying to prevent the outbreak of a bloody tong war.

Los Angeles, 1908. In Chinatown, the most dangerous beat in Los Angeles, police matron Anna Blanc and her former sweetheart, Detective Joe Singer, discover the body of a white missionary woman, stuffed in a trunk in the apartment of her Chinese lover. If news about the murder gets out, there will be a violent backlash against the Chinese. Joe and Anna work to solve the crime quietly and keep the death a secret, reluctantly helped by the good-looking Mr. Jones, a prominent local leader.

Meanwhile, the kidnapping of two slave girls fuels existing tensions, leaving Chinatown poised on the verge of a bloody tong war. Joe orders Anna to stay away, but Anna is determined to solve the crime before news of the murder is leaked and Chinatown explodes.