What You Can Learn About Victorians from the Winchester Mystery House

I recently visited a famous Victorian oddity, the Winchester Mystery House in San Jose, California, but unlike most tour-goers my interests weren’t just in the historical quirks of a rich woman with an architectural addiction. I was interested in the ideas and inspiration, along with the historical details, I could glean from a historical Victorian house/mansion.

This post specifically deals with historical details I gathered from the Winchester as a historical Victorian home. For more on the creepy, whimsical side of the Winchester, check out my post Check out my accompanying post on The Most Interesting Stuff You Don't Usually Hear About the Winchester Mystery House.  Or 10 Creepy Facts About a Real World Necropolis.

The History
or Backstory Rather
(Oh Crap it's Up Front) 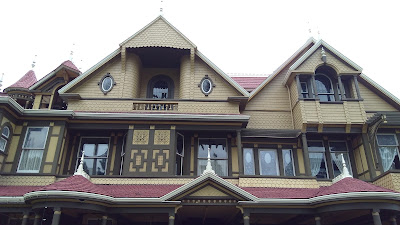 For those who don’t know, the Winchester Mystery House is a bizarre mansion built by the wife of the heir to the Winchester fortune (the gun that won the west).

After a series of devastating tragedies that ended with her losing her dearest loved ones, including her daughter and husband, Mrs. Sarah Winchester turned to the popular Victorian world of Spiritualism. Spiritualists were believed to have the ability to contact the dead, and the one who Mrs. Winchester visited confirmed what she had already begun to believe, that she was being haunted by the spirits of people killed from the Winchester guns. The only way to appease the dead, according to the medium, was for Mrs. Winchester to build a house and to never stop building it, not for one minute.

According to The Smithsonian Magazine online, Mrs. Winchester had 16 shifts of workers (paid three times the normal wage) working 24-hours a day nonstop from 1886 to the time of her death in 1922. The product of that is the San Jose mansion, which has curiosities like doors that lead to nowhere, rooms within rooms, twisting corridors, and stairwells that lead to the ceiling. That's just to name a few. 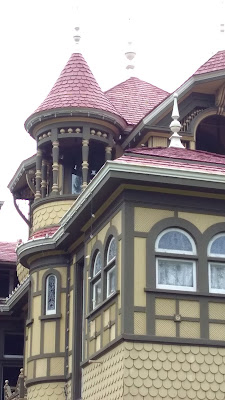 Some say Mrs. Winchester, who visited a medium table every day to determine the work of the next day, was crazy.

Others say, she built the house in such a way to confuse the spirits haunting her.

Then others say, she built a house that only made sense to the spirits who were directing her (one of my favorite theories).

Some say the quirks of the house are due to the fact that Mrs. Winchester, having lost so many loved ones, just didn’t care about little things like making sure the house made sense. So if she didn’t want stairs, she just walled off the stairs without worrying about the fact that it looked bizarre to just have stairs going nowhere.

Finally, many of the people who work at the house argue that it was her life's work, her form of expression, a way to make meaning out of the chaos. And in some way, isn't that a poetic query - Was it spirits haunting her or simply memories and regrets? 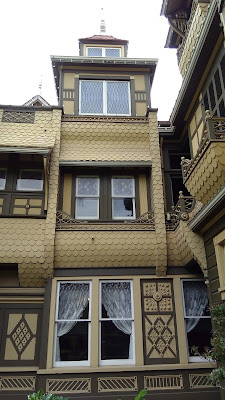 How Does this Help Writers?
I think it goes without saying that the Winchester Mystery House is awesome for writers of the Gothic, Victorian, haunted house, ghost and magical realism genres. In fact, I'm pretty sure the Winchester was inspiration for a similar house in the fabulous magical realism novel The House of Spirits by Isabel Allende. This inspired house is specifically detailed in the book, not the movie. I want to say I heard about it in a note at the end of the Audible audio book, but I can't say for sure. If anyone knows, feel free to confirm or deny in the comments.

Writers take ideas from real life all the time and historical novelists thrive on using facts to inspire fiction. As a historical novelist, this is one way I do research and find these little details that color my historical worlds - I visit Victorian houses and take note of how things worked.

So below you will find historical details about the architecture and home life that could be applied to other settings in a Victorian historical novel.

Again, if you are looking for something more specific to the weird Winchester history, check out my other post The Most Interesting Stuff You Don't Usually Hear About the Winchester Mystery House.

I love collecting these little details but it feels like there is just so much more that could be added to this list. Got something to add? Send me a comment! I'd love to include your addition.


Also check out my accompanying post The Most Interesting Stuff You Don't Usually Hear About the Winchester Mystery House.