What People Are Saying About My Forthcoming Title

Before I get to the feedback, I'd like to give you a brief update on the status of The Binding of Saint Barbara. It is finished and ready to begin the publishing process but for various reasons I am attempting to pitch to agents and publishers before going directly to indie publishing again. Unfortunately, the process of pitching agents and editors is can take a lot of time, so I'm still in the waiting phase. I'll keep you updated on social media and via the newsletter so make sure you are subscribed or follow me.

"Stephanie Carroll spins a mesmerizing tale of love, captivity, the power of death, and the depths of memory. This is a vivid, fascinating, thought-provoking book. I couldn't put it down and can't wait to read it again." —Jennifer Kincheloe, award winning author of The Secret Life of Anna Blanc and The Woman in the Camphor Trunk.

It’s a book that I would read again and again. It was a page turner. It’s one of those books that when I sit down to read it, I get frustrated when I have to stop and do something else. —Laura Jones

… right around the 50% mark it picked up like an avalanche and I couldn’t put it down. I finished the whole second half in one night. … I loved the gothic atmosphere and the historical events. I love learning about things I don’t know about. —Nicole Evelina, award winning author of Madame Presidentess and other novels.

I really enjoyed the story itself, very unusual to what I normally read. I liked that it filled multiple genres: mystery, fantasy, coming of age. . . . I was swept up into the story half way through the first chapter. –Krystal Andersen

I liked that The Binding of Saint Barbara adds dimension to a dark topic, allowing the reader to circle around the moral complexities of the nation’s first electrocution without forcing a particular reaction. —Allison Hiltz, founder of The Book Wheel Blog & The 30 Authors Event and Candidate for Aurora City Council.

Stephanie Carroll's ability to portray Victorian characters never fails to impress, and her portrayal of the historical events leading up to the controversial first death by electrocution was nothing less than gripping all the way up to the final heart-wrenching moments. –Rene Miller Parades, Instructor of History, West Hills College

[Stephanie] did such a great job with [the villain]. I really fell for it. I thought he was genuine and then WHAM! He’s such a sick bastard and you are so talented for making him so twisted! (Actually, I may be a little afraid of you now.) —Nicole Evelina, award winning author of Madame Presidentess and other novels.

THE BINDING OF SAINT BARBARA


Inspired by and set amidst one of the most controversial decisions in American history—the first death by electrocution—The Binding of Saint Barbara follows the story of the people who came to know, fear, and love the condemned ax-murderer during the year he awaited his death in Auburn Prison in 1890 New York. 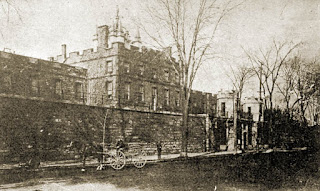 Charlotte Durston hasn’t stepped outside the walls of the castle-like fortress of Auburn Prison since she was a child. Her overprotective father, the warden, makes sure everything she needs is provided, so she has no need to go out nor does she have a need to interact with the inmates until now. At seventeen, she is desperate for a normal life and for people to treat her like an adult. Her parents agree to send her to Bernard College in Manhattan where she can have a proper coming out in society, but first she must prove she is responsible and can manage herself even around the worst sort of people.

Her father tasks her with ministering to the newest inmate, the first man condemned to the electric chair. However, in an effort to impress the man she loves, Guard Daniel McNaughton, Charlotte gets too close to the cell, and the prisoner reaches through the bars and strangles her until she loses consciousness. The trauma should have ended when Daniel pried the prisoner’s fingers from her throat, but from then on, Charlotte is plagued by panic attacks intermingled with flashes of memory—someone leading her through a lightning storm in the middle of the night.

Charlotte is still determined to leave her cloistered life and begs for another chance, but the next inmate she meets not only has information that could determine the outcome of the electrocution appeal and save the man who tried to kill her, he also knows something about Charlotte, a secret about a lightning storm that happened over ten years ago. As the memories become ever more vivid, Charlotte realizes that night is the answer to why she cannot break free from her prison and that it must hold the key to her escape.

Experience one of the most controversial decisions in American history – the world’s first death by electrocution – through the eyes of those who witnessed it and the man who endured it.

Incorporating historical newspaper articles and the battle between Thomas Edison, George Westinghouse, and Nikola Tesla—Stephanie Carroll mesmerizes readers by interweaving history and intrigue to create a seamless exploration of the good and evil in us all.

A Little More About the Charactersin The Binding of Saint Barbara

Experience one of the most controversial decisions in American history – the world’s first death by electrocution – through the eyes of those who witnessed it and the man who endured it.

Charlotte Durston is a prisoner in New York’s Auburn Prison – but she isn’t a criminal, she’s the warden’s daughter. Under the thumb of highly moralistic parents, she hasn’t stepped outside the walls of the castle-like fortress since she was a child. It’s for her protection, or so they say, but at 17, Charlotte is desperate for a normal life in the adult world. In order to prove herself, she sets about ministering to the newest inmate, the first man condemned to the electric chair, a good deed she will come to sorely regret.

Guard Daniel McNaughton sees everything from his post outside Kemmler’s cell. Though slowly falling for the one woman he’s forbidden to love, he can’t deny the oddness of Charlotte’s bloody fingers or the ghosts in her eyes, nor can he turn a blind eye to the unsavory advances of one of the inmates toward her. He is also all too aware of the war within the warden’s family and the battle going on in Kemmler’s soul. As he fights to help the condemned man find salvation, Daniel also confronts his own weaknesses, praying to find the strength and steel to protect those he loves.

Condemned William Kemmler is the first man to walk through the prison’s gates who will not leave again. Fighting an addiction to alcohol, a looming death sentence and his own personal demons, he unwittingly sets off a chain of events that not only determines his chances at redemption, but leads Charlotte down a dark path of visions and panic attacks intermingled with flashes of memory that may or may not be real, causing everyone around her to question her sanity.

Warden Charles Durston is posed to make history when as the first warden to oversee an electrocution, but a terrible secret from his past haunts him as he fights for the legality of this so-called “humane” method of execution.

Inmate Michael Bradley is a survivor. Struck by lightning as a boy, he is more than he seems. This two-bit con man has information that could determine the outcome of the electrocution appeal and knows something about Charlotte, a secret that is key to why she can’t break free from her prison. As the only person that holds the key to her escape, he wields more power than anyone suspects – a position he intends to use to his full advantage.

Gertrude Durston, has spent her life serving the less fortunate within the cold stone walls of Auburn Prison, and she has gained a level of authority she values more than she even realizes, but she is ready to risk it all. She is so determined to save William Kemmler's soul that she is ready to sacrifice anything, including her marriage and public ridicule by breaking a prisoner out of Auburn Prison so he can testify on Kemmler's behalf.


Read about the history of the first death by electrocution!

Sign Up to be notified when this book comes out!