Working on a New Series!

It's October 2016, and it's author update time, so where am I on writing books? After coming to a stopping-point with The Binding of Saint Barbara (I can’t say it’s finished until it’s published and right now I'm waiting to hear back from agents), I took a little writing break because I was really burnt—to a crisp black! When I cooled off, I considered the couple of rough drafts I had hanging around, and I kept finding myself drawn back to the original idea that inspired me to write a novella around this time a year or so ago. You may remember, I wrote a post about it.

The original idea was to write about a Victorian heroine struggling with chronic pain and illness (inspired by my own struggle with chronic pain) on the English moors, incorporating elements of both Gothic and magical realism, but without paranormal themes. Then I saw this photo of a prominent Victorian spine specialist, Dr. Lewis Albert Sayre, observing a half nude woman suspended in his contraption, and well, you know how it goes with me and my images of inspiration.

Ultimately, the novella I wrote sucked! At the time I was trying to learn to write fast, and also overcome my fear of clichés, so I ended up writing a sloppy tale of Gothic tropes. Boo! But now, having grown past those hang-ups, I have some new plans for this premise.

I can’t divulge everything, but basically I employed a visual plotting system to help me come up with some ideas that I really like. Not only am I planning to turn the novella into a novel, but I’m also considering making it a three or even five-part series. This just goes to show that I don't do short very well - lol!

The series would focus on several stages of life for the heroine, Lorena. Right now I’ve plotted three books, the first focuses on Lorena’s attempts to overcome her chronic illness as a young girl after her father sends her to a sanatorium/asylum, the second book focuses on her debut in upper class Gilded Age society and her marriage to her second choice because invalids aren't easily married off, and the third book would focus on her adoption of an orphaned child because invalids couldn't have children very easily. 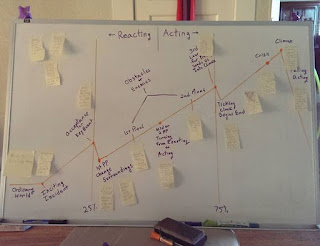 I’m not dedicated to the specifics yet because a lot of that will come out in the research stage, which is what I’m working on next. Even though at this point, I am extremely familiar with the Victorian world, I still have to conduct research because I need details from the specific Victorian world I’m interested in. Plus, for me at least, the research stage is where a lot of my story development occurs. While researching one aspect of my story, I’ll learn historical points of interest and those will inspire ideas for scenes and characters.

Keep in mind that last year, I had completely different plans for this story and next year it might look completely different than I’m expecting it to look right now. This is the nature of creation, for me at least, which is actually funny because I am the ultimate planner, but I can’t plan or know where my art is going to go.

So to keep up, check out my Pinterest Board where I’m keeping track of all my research resources.


And read my post on The Agent Waiting Game to find out what's going on with The Binding of Saint Barbara.

I love your comments and questions so ask away! They won't appear right away as I have to approve them first, but I will get on it ASAP!