I recently discovered the fantastic magical realist/surrealist author Aimee Bender, and I just loved her anthology The Color Master and just devoured her fantastic novel The Particular Sadness of Lemon Cake. 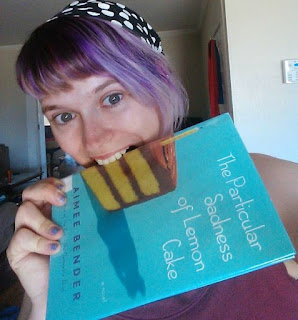 I don't usually do book reviews, but I really have to recommend these two and probably anything else Aimee Bender has up her sleeve.

The Color Master is full of unique and fun short stories. Not every single one is magical or surrealist, but they are all great! Also, I really love that these stories are varied in length, some only being like two pages. They are also easy to read, which is a major plus as literary fiction goes. Plus, it's almost as if each one contains an important lessons about the art of writing or about a particular fiction technique. I don't think she intended that, and it might just be me noticing because I'm a writer. Last thing I got to mention is how awesome the cover is! The title words are actually sewn in different color thread, which corresponds to the short stories "Tiger Mending" and "The Color Master."

I was planning on reading maybe one or two of the stories, to just get an idea for her writing style and use of magical realism, but after reading the very first story, I was so hooked!

This was "Appleless." First off it's short, which is really smart to start out with in an anthology is you ask me. Secondly, it immediately draws you in with all the unique descriptive language related to apples, and then with the strange way the story about apple obsession and addiction turns into something much darker that is portrayed in such an intriguing way, that you almost don't realize the horror of it at first. What's really interesting is how I wanted to devour the story itself, because of it's scrumptious word-choices and intriguing voice, and that feeling kind of paralleled the obsession of these apple addicted characters.

After that, how could I not want to read everything in this book!

"Tiger Mending" was sweet and strange and fantastic. The story is told from an outsider perspective (fiction technique) whose sister is a master at sewing and is recruited to venture to another country (I want to say India, forgive me if I'm wrong) to do some extremely important but secret work. She insists on taking her sister (the narrator) who in comparison to her is just going nowhere with her life. She works at a fast food joint and doesn't seem to care about self-improvement. Whenever a story is told from an outsider perspective, the story might seem like it's about the character of focus, but really it's about what's happening to the narrator, and it's really interesting to learn about the narrator through her telling of this surreal tiger mending adventure.

Fun side note. It just so happens that around this time, I heard this song called "Tiger" by a band called MyPet, which is fun because MyPet Tiger, get it? Anyway, the song reminded me of this story, so I Tweeted the song and how it reminded me of the story to Aimee Bender, and she responded "Love that!" It's not that the video or lyrics match up to the story. It's more of the unique sound and tiger element. I don't know, it just connected for me.

"Faces" was really strange and one of those stories that just kind of makes you think. The ending was what made me feel like there was some sort of important lesson to be learned regarding fiction writing because at the end there wasn't really any resolution or major change for the character.

I did some reading and discovered that when it comes to short stories, there is this idea that it's not your job as the writer to solve the characters problems or fix things for them but to just to tell their experience and struggle with the problem. The point is that sometimes as writers we force solutions or change upon our stories and characters because we feel we have to, but some writers say we don't. Aimee Bender shows that it can be done with this one, in my opinion.

"The Fake Nazi" was another one that made me wonder about fiction technique and endings. It was a strange one, but really had a lot to say. It was particularly interesting to get a feeling for what it must have been like for the country of Germany after WWII. As Americans, we don't think about it, but the people of Germany had to keep on living life and had to deal on a mental and emotional level, and many must have struggled with a level of guilt for events they were never involved in or even knew about. 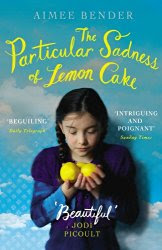 "The Color Master" for which the anthology is named, was a beautiful piece that flooded the mind with fantastic hues and imagery. There was definitely magical realism in this one and a strong use of the distant perspective, another one of those fiction writing techniques I mentioned. It made me want to play with the distant perspective more in my own work. Unlike some of the previous stories, this one was dealing with darker things but in a lighter way, and the ending was just right, bittersweet and satisfying.

Speaking of bittersweet and satisfying, The Particular Sadness of Lemon Cake was an award winner and best seller, and it's become one of those few books that spoke to me on a personal level, but first let's talk story, characters, and magical realism.

The story is told from the perspective of Rose Edelstein who on her ninth birthday discovers that she can taste people's emotions in the food they cook. She doesn't just taste surface emotions, but the deeper and darker layer of struggle that a person has in their lives at that moment. She first discovers this in her mother's homemade lemon-chocolate cake, when she tastes her mother's sadness and dissatisfaction with her life in general. Quite a lot to swallow for a nine-year-old!

Although this magical realist gift is the catalyst for the story, it's only one part of the plot line. Really the story is about Rose's relationship with her family and with the world. What I really love about this book is that it maintains a key facet of magical realism, and that's the realism part. A lot of times the realistic side of magical realism gets lost in all the magic, but in this novel, Aimee Bender mastered the realism of the internal and often secret struggles of a "normal" nuclear family, the type that looks like what society says is great on the outside, but really there is struggle, secrets, and heartache deep within the layers. 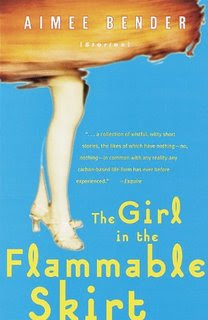 This is why the story really spoke to me personally. The family's struggles were quite similar to struggles I experienced growing up in a nuclear family. Much of what Rose went through on a psychological and emotional level felt so familiar to me. As a child, it's difficult to understand how or why, but you can sense things from family members, like dissatisfaction with life or a pulling away from the world. It was like Bender had magically reached inside of me and pulled out feelings from my own life to instill in this book, almost as if instilling emotions into a lemon chocolate cake.

The other thing I have to say about this book is that the last line was one of my favorites in recent reads, one of those absolutely perfect, satisfying, and yet so bittersweet. Don't read it first because it might give something away. Read the book right, leaving the best for last!

About Stephanie Carroll
Stephanie Carroll is the author of A White Room and "Forget Me Not" featured in Legacy: An Anthology. She blogs about magical realism, her research into the Victorian Era and Gilded Age, writing, and life in general at www.stephaniecarroll.net and at The Unhinged Historian. She also founded Unhinged and Empowered, a blog for Navy wives and girlfriends.

Join her journey with her quarterly newsletter (only four emails a year) for VIP Readers!