If you enjoy this post, you might also enjoy my novel A White Room, which was inspired by "The Yellow Wallpaper."

The Woman’s Experience through “The Yellow Wallpaper” 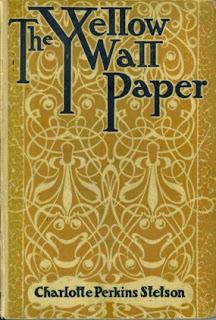 “The Yellow Wallpaper” was written from the vantage point of a woman writing in a journal. She’s been diagnosed with some kind of condition* by her husband who is also a doctor. Her husband has brought her to a country home to rest as a form of treatment, and he insists that she rests all the time, no stimulation. She’s not even supposed to be writing, but it’s the only thing that brings her solace, so she sneaks to write in her journal.

Her husband forces her to rest in this one room that she cannot stand. She hates the wallpaper in it, but without anything else to do other than stare at it, she becomes obsessed. Soon, she is seeing it move at night, and she sees someone inside of the design, a woman trapped behind the paper.

It’s clear that whatever her condition is, bed rest isn’t helping, but her husband insists, and she obeys, continuing to slip deeper into her obsession with the wallpaper until finally on the day they are to leave the country home, she snaps. They find her “creeping” and peeling the yellow paper from the walls. She has freed the woman trapped behind the design and has in fact become her. She no longer cares what her husband demands, and he faints at the sight of her.

*There are references to an infant child in the story that suggests the main character was actually suffering from postpartum depression although this is never fully addressed in the story itself and postpartum was not an understood condition at this time. Based on the described symptoms, treatment, and later author accounts, historians widely accept the character in the story was diagnosed with hysteria or a related condition referred to as a “condition of the nerves.”

A Horror Story or a Message?
Charlotte Perkins Gilman’s story “The Yellow Wallpaper” was published in a magazine in the early 1890s. At first glance, many readers, both past and present, see a scary story of either a haunted house or a situation of pure insanity, both of which are elements of Gothic fiction. “The Yellow Wallpaper” is considered a part of the Victorian Gothic and horror genre, but it is much more than that.

The story was inspired by Gilman’s own experiences after seeking help for her “nervousness” and “melancholia” from the famous neurologist S. Weir Mitchell, who was known for his “rest cure” treatment for hysteria. Read what Charlotte Perkins Gilman herself said about her story “The Yellow Wallpaper.”

Historians now look to Gilman’s short story as one of the most revealing inside looks at the experience of a woman diagnosed and treated as a hysteric during the late nineteenth century. Since Gilman was also a feminist with very public ideas regarding her views, this work is also seen as a look into how feminism may have developed during a time when hysteria was being diagnosed on epidemic levels.

What was Hysteria to the Victorians? 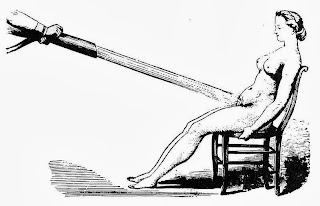 Hysteria evolved out of Ancient Greece with theories regarding a woman’s uterus having the ability to wonder the body and affect the brain, an idea that prevailed into the nineteenth and early twentieth centuries. In fact the smelling salts Victorian women used to prevent themselves from swooning were believed to frighten the uterus away from that area of the body.

Throughout the century, hysteria was commonly associated with nervous or anxious tendencies such as fainting. However, by the late Victorian Era, there were a massive amount of symptoms associated with the condition known as hysteria, and women were diagnosed no matter how unique their actual situation. In many cases, men and women used it as an explanation for any kind of unwanted or erratic female behavior, especially emotional behavior.

There were also a wide variety of cures, including the rest cure (used in “The Yellow Wallpaper”), the water cure, vigorous exercise, vaginal stimulation*, hypnosis (Jean-Martin Charcot), and the beginnings of talk therapy and psychoanalytic analysis (Sigmund Freud). Due to Freud’s work, much of the research on hysteria has had an impact on modern psychology.

Hysteria and the Women’s Movement
In many ways the hysteria movement reflected and or embodied certain problems women wanted to be rid of through the women’s and feminist movements of the late nineteenth and early twentieth centuries.

At this time, men and women were expected to live in “separate spheres.” Women dominated the home, childbirth, childrearing, and religion while men dominated the public world of business, economics, and politics. It was believed that these separate spheres were determined by nature. Women were believed to be naturally pure, pious, domestic, and submissive, four traits called the Four Pillars of The Cult of Domesticity or True Womanhood. These ideas were not something decided by men but were deeply ingrained belief systems, traditions, and values.

The problem was that the beliefs regarding a woman’s nature put her in a situation of subjugation. Women were believed to be naturally fragile physically, emotionally, and mentally, which is why society considered the public domain as something from which women needed protection. This mentality also meant that women were seen as more susceptible to mental illness and lacked the competence to make decisions regarding their own wants and wellbeing—deeming them as naturally and inherently mentally unstable. This was accepted by society, both men and women.

However in the late 19th Century, the advent of the “New Woman” challenged these ideas.

What was Hysteria Really? 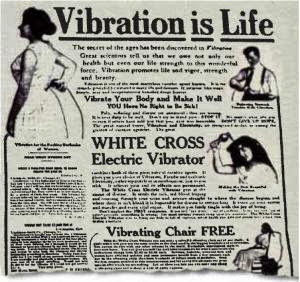 The results of this, however, were situations like that which was revealed through “The Yellow Wallpaper.” Women were placed into unbearable situations and not deemed mentally capable of determining whether or not it was good for them. Their faculties were also questioned if they desired to act outside of what was considered acceptable. If a woman decided to pursue a profession instead of finding a husband, it was reasonable to question her mental state as this desire would be considered unnatural for a woman. It was believed that a woman would never in her right mind want to choose anything other than a lifestyle that resulted in bearing children as was her natural purpose.

Modern analysis of documented cases of hysteria suggests many of the women were actually experiencing real mental illness including depression, anxiety, postpartum depression, or severe stress. Some historians believe these types of mental disorders were more common in women at the time as a result of the inequalities they experienced, which due to changes occurring in society, were no longer bearable.

Other cases, however, revealed rebellious women. Such cases included women whose behavior suggested lesbianism, promiscuity, views against marriage, feminist views, or the desire to pursue what were considered inappropriate female roles. Learn more at Science Museum History of Women and Psychology.

Why the Late Nineteenth Century?
For a long time these beliefs prevailed without causing problems for men or women. They were born out of centuries of survival, but the late nineteenth and early twentieth centuries were times of great change. Modern technology made it possible for much of women’s work to be handled in factories or in the home with new types of gadgets and machines. Women were becoming useless and without purpose in their accepted sphere.

It’s natural for people to find purpose in their lives, so of course the desire grew within women to venture out into the world and look for more. Unfortunately, the values and beliefs about women did not change with the modernization of the western world. This led to a flood of discontent that appeared in the form of actual mental distress or rebellion that was interpreted as mental distress. Unfortunately, the mass diagnoses of hysteria and subsequent treatments further subjugated many.

These desires of women ultimately broke through the restrictions of society resulting in the women’s and feminist movements and forming the “New Woman” of the early twentieth century. However, until common conventions gave way, these women were either deemed insane, or they stood outside of society as black sheep or spinsters. Some women like Gilman managed to publish their views and contribute to the beginning of the women’s movement while receiving the disdain of society, but others endured brutal responses and punishments to such behavior.

The Revelation of “The Yellow Wallpaper”

The amazing thing about the short story “The Yellow Wallpaper” is that it manages to encompass this in the span of ten or so pages, and it reveals it through experience not through direct explanation. In a time period when it was unacceptable to have these views, taking readers through the experience of a woman had an impact that others could not achieve through stating the problem directly.

Gilman’s message did have an impact, not only to modern readers, but on contemporary readers, including the doctor Gilman said she wrote the story in response to. In her own words: “But the best result is this. Many years later I was told that the great specialist had admitted to friends of his that he had altered his treatment of neurasthenia since reading The Yellow Wallpaper.”