In my novel A White Room, my heroine goes insane and her primary symptom is that she believes the house and furniture are coming to life and plotting against her, but as you can see in the below excerpt that’s not the only thing that makes her seem off. I used five techniques to write her inner thoughts in a way that was crazy too.

Make sure to scroll to the bottom to read an excerpt from A White Room.
1.      Distraction

In the above excerpt, I have my character Emeline struggling to pay attention, which makes her comprehension of the other characters feel scattered and confusing. This creates a sense of insanity. She can’t take in the world around her and normal human interaction becomes confusing and threatening to both her and the reader. Having distractions in the writing literally creates the effect of jerking the reader back and forth, which creates a chaotic mood overall.

The definition of synesthesia is experiencing a sense such as smell but from a stimulus that isn’t for that sense. So say if someone smelled a rose after touching a coffee cup. As a literary device, synesthesia is used a lot in poetry to create interesting descriptions by combining sensory words that complement each other like loud perfume. Perfume cannot be loud, but the mixed description brings a twist to it that grabs a reader’s attention. This can be done through metaphor or simile – saying something is or is like.

Combing complementary sensory descriptors creates a neat effect, but when you combine senses that don’t naturally work together, it comes out kind of weird, kind of crazy.


He must not have heard my eyes.

I had recently added the Ageratum alyssum. It was just a small white flower, but the name reminded me of the word asylum. I very much enjoyed the notion of a mad flower. At that moment, I wished I could crawl into the window-box jungle and build a little home there surrounded by insane flowers. – A White Room.

4.      Transference of Thoughts into Unintentional Behaviors

On multiple occasions I have Emeline thinking something and then accidently do or say whatever it was she was thinking without having deciding to do it. This creates a sense of being out of control and being taken over by the mind.

Repeating is something Fight Club and Choke author Chuck Palahniuk does brilliantly.

Repeating can be done with a phrase or saying or it can be used in a string of thought, having your character repeat a word or multiple words in a sentence or paragraph, which will make it seem like he or she is going in circles.

Repeating kind of goes hand in hand with obsession. Obsession works really well to suggest insanity when it’s over something mundane or strange, but it can also suggest crazy when it’s somewhat normal too. In my novel, Emeline is obsessed with the furniture, but Tyler in Fight Club is obsessed with his friend, which is not too abnormal until it turns out to be himself.

Bonus: Repeating can also be a behavior, a tick, like scratching one’s face or cracking a certain knuckle over and over.
Insanity is more than just having two personalities or seeing the furniture move. It can also be shown through a character’s thoughts and emotions and behaviors and even more importantly the way that the author writes them. The writing style and syntax itself can be a bit crazy, nonlinear, and chaotic.

These five techniques can be very useful to create insane inner thoughts, but they aren’t the only devices. The cool thing about writing crazy people is that you can get creative and come up with your own insane tools. Now go forth and spread the madness!

An Excerpt from A White Room

Dr. Walter Bradbridge leaned over me. I stared into his powder blue
eyes and tried to speak volumes to him without saying a word.
“It was good of you to keep her in bed, John.”
He must not have heard my eyes.
John stood a few feet behind him, spying over his shoulder.
If he said I was mad, I didn’t know what I would do. Then
again, how could he not reach such a conclusion when I knew John
had misconstrued the facts? It was up to me to sway him, but I was
so distracted listening to them through the walls. The little girl was
giggling and humming to the left, and I could sense that wicked
being pacing behind the wall opposite the bed.
“Is she ill?” John paced behind Walter.
“I’m not ill,” I said.
“She doesn’t appear to be sick, but I’m afraid—well.” He
straightened and spoke to John in whispers.
John’s blank expression grew concerned as he brought his hand
under his chin.
He was telling him.
“What would bring this on?” John asked.
“She is still in mourning, which can take a toll, but there are a
number of—”
“What?” I yelled, surprising myself with my outburst.
Both Walter and John jumped and looked at me.
Walter touched my hand. “It’s nothing to fret yourself over.”
He continued talking to John as if I couldn’t hear. I wished they
would speak up.
John folded his arms. “Can I leave her in this condition?”
“You shouldn’t have to cancel. I know this is an important trip.”
He situated his instruments in a black leather satchel.
John sighed. “That’s a relief.”
“I want to go,” I said.
“Emeline, I don’t think that would be wise,” Walter said.
“What condition?”
He shook his head. “Don’t you worry yourself about that.” He
turned his back to me. “It might actually be best for her to be
alone. The less stimulation the better.”
John nodded, holding his chin with one hand and an elbow with
the other.
“You’ll need someone to check on her, though.”
Sounds seeped through the walls like black blood—how could
they not hear it? They were so loud they drowned out their words.
I watched their mouths move, but their voices no longer resonated
in my ears.
Walter set his bag on the table next to the bed, and abruptly my
senses returned. He spoke to me in a tone meant for a child. “I
believe we are all finished here.”
My lips shook as I waited to be condemned with the diagnosis,
but he said nothing more. He took hold of his bag and strode to
the door. John followed. Would he not tell me? Was he to judge me
to John and deny me my own sentencing? They left, and the door
clacked shut.
—Quoted from A White Room with the permission of the author. 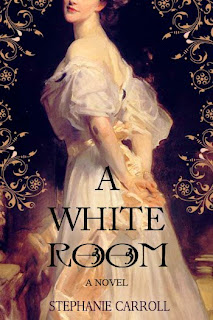 About A White Room

At the close of the Victorian Era, society still expected middle-class women to be “the angels of the house,” even as a select few strived to become something more. In this time of change, Emeline Evans dreamed of becoming a nurse. But when her father dies unexpectedly, Emeline sacrifices her ambitions and rescues her family from destitution by marrying John Dorr, a reserved lawyer who can provide for her family.
John moves Emeline to the remote Missouri town of Labellum and into an unusual house where her sorrow and uneasiness edge toward madness. Furniture twists and turns before her eyes, people stare out at her from empty rooms, and the house itself conspires against her. The doctor diagnoses hysteria, but the treatment merely reinforces the house’s grip on her mind.
Emeline only finds solace after pursuing an opportunity to serve the poor as an unlicensed nurse. Yet in order to bring comfort to the needy she must secretly defy her husband, whose employer viciously hunts down and prosecutes unlicensed practitioners. Although women are no longer burned at the stake in 1900, disobedience is a symptom of psychological defect, and hysterical women must be controlled.


A novel of madness and secrets, A White Room presents a fantastical glimpse into the forgotten cult of domesticity, where one’s own home could become a prison and a woman has to be willing to risk everything to be free.