This article was originally featured on Arra Abella's Style Reader as a guest post promoting my novel A White Room. It's a very cute and posh book review blog so check it out when you have the chance. 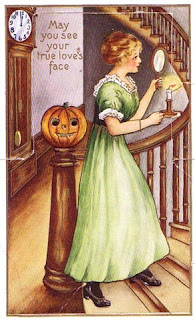 The following Victorian Halloween Games are from the October 25, 1903 edition of The Sunday Herald of Syracuse, New York. It was titled “Halloween: What to do on this Witching Eve,” and is an instruction for a witch themed party for young unmarried girls. It includes detailed descriptions of Halloween “charms” or what we would call spells, most of which were designed to determine the girls’ future husbands.

Also check out my post Authentic Victorian Halloween Decoration How-To also from an article in the October 25, 1903 edition of The Sunday Herald of Syracuse, New York. The article is titled “Halloween: Unique and Ghost-Like Decorations” and is an account of a Halloween party for adults, focusing specifically on the decorations.

Halloween Witchcraft Spells for Unmarried Girls
In addition to the spells below, this article also suggests some decorations and refreshments as this was an instruction for a witch themed party. It describes how to set a dinner table with a jack-o-lantern centerpiece and carved carrots and turnips as candlesticks. Red and green cabbages could be used as baskets for nuts, fruit, and marshmallows for toasting. The article explains refreshments should also include apples, cider, fried cakes, and tea grounds, which are good for prophesizing one’s future. On the dinner cards could be placed witch dolls. The doll could be made with a nut for a head, with a witch hat on top and toothpicks for the body.

The article also recommends using “Burn’s Poem” to determine other fun things to try or to use lines from the poem for dinner cards. The fact that the article only ever refers to this poem as “Burn’s Poem” suggests that it was a common reference around Halloween time, and that anyone would recognize it. Robert Burn’s 1785 Halloween Poem is almost guaranteed the poem to which the article is referring to because it includes the same and additional instructions on Halloween charms. All the charms below appear to have come from this poem.

Although the “charms” or spells below are reminiscent of something 12 or 13-year-old girls would partake in today, this article does not specify an age but is clearly directed toward unmarried girls. It was expected that most girls would be married before or during their early twenties.

I cannot help but point out the fact that unmarried girls at this time were expected to be virgins, and virgins are common components in spells popularized through modern-day pop culture. However, there was no mention of a virgin in this article.

Charms and Games for a Bewitching Halloween Party:

1. Girls can throw two nuts into a fire, each representing a person. Most pop out but the two that burn quietly to ashes show a good omen for those two people.

2. Melt lead taken from tea boxes in a cheap iron spoon (as the lead will ruin the spoon) and then drop it into cold water. It will turn into a shape representative of the occupation of the girl’s future husband. Almost any shape can be formed, but the common shapes and meanings are: shears for a tailor or newspaperman, sword for a soldier, book for an author, or a desk for a preacher.

3. Seven girls can mix a dumb cake consisting of water and flour mixed into stiff dough. The girls cannot speak a word during this. Each girl stirs the dough once or twice and before baking uses a “new pin” to carve her and her beloved’s initials. The initials that are still visible after baking belong to the couples who will be married within the year.

4. Another cake of the usual ingredients can be made with silver objects mixed into the dough. The girls can speak while making this cake, and each must stir it once or twice. After it’s baked, each girl has a slice. Whichever object is in her slice of cake prophesizes her future. A ring means a happy wife; a dime means riches; a raisin means happy motherhood; a thimble means she will never cease to wear it; a key unlocks the hearts of all men but means many lovers and never a husband; and a wheel means travel over land and sea.

5. Everyone knows about bobbing for apples, according to the article, but few are aware that if you hang an apple by a string and then catch it with your mouth without using your hands, it foretells the successes of the coming year.

6. A girl can name an apple the name of her most desired person then pierce the core with a needle. If the needle goes through a seed, the desired one is hers.

7. The girls can name several apple seeds and place them on their lips. The one that stays the longest is the one with the name of the man who loves her most.

8. If a person peels an apple, then turns the peel around her head three times and drops it on the ground, the peel will form the initial that she wishes her future name to have.

9. In complete silence, a girl can walk down the stairs backwards, while eating an apple and holding a mirror up to look for the face of her true love who will appear in it. (The article mentioned that this one is trying on the nerves even if a friend is holding a lamp at the bottom of the stairs.)

10. Girls can run two new needles, one representative of her and the other of “he,” into a candle at right angles so that they cross. The article isn’t clear, but I’m pretty sure you are supposed to stick the needles into the hard wax of a standing candle or candlestick, and not into the flame. If the candle burns passed the spot where the needles cross, all will go well but if it does not, who knows.

11. The cabbage charm originates from Scotland. Girls walk blindfolded into a cabbage field and pick a head. If a lot of dirt clings to the roots, wealth is coming by marriage. If the stem is good and straight, the future husband will be comely. A taste of the cabbage heart indicates the disposition of the man of a woman’s future. The article recommends people who cannot go into an actual field, bring cabbages in and store them in a cellar. It does not explain how guests are supposed to read the cabbage accurately when the freshly pulled roots are what are to be read.

12. To produce a prophetic dream: Seven girls each make a string of acorns and wind it around the same log or stick of wood and place it into a fire. They must all sit at the opposite side of the room in complete silence until all is burned. Then they take out the ashes without any help and repeat:
May my marriage be my theme
To visit me in this night’s dream
The image of my lover send
Let me see his name and face
And his occupation trace

13. A charm that is not well known, according to the article, is the card charm. At a quarter to 12 a.m., all sit at a table and say nothing. One word will break the spell. Promptly at midnight, cards are dealt using only face cards. A king means a speedy marriage; a jack means a broken engagement; a queen means an old maid; a diamond means riches; a spade means thrift; a club means poverty; and a heart means love in a cottage.

14. When the guests leave, one last charm can be done by a girl alone in her room. This charm will determine the faithfulness of a lover. She must pick two long stem roses and return to her room without saying a word. She names one rose for herself and the other for her current beloved. She then binds the stems together with twine while gazing intently at her sweetheart’s rose and recites:

Twine, twine and intertwine
Let my love be wholly mine
If his heart be kind and true
Deeper grow his rose’s hue

If he is faithful, the color of his rose will darken and become more intense. The article says there are recorded accounts of roses actually changing hue, but the only witnesses were the girls who produced the charm.

I hope you enjoyed reading these historical accounts of Victorian Halloween decorations, parties, and party games as much as I enjoyed researching and writing about them. I hope they make a unique and fun addition to your Halloween party this year.