Excerpt from "Forget Me Not" Featured in Legacy: An Anthology 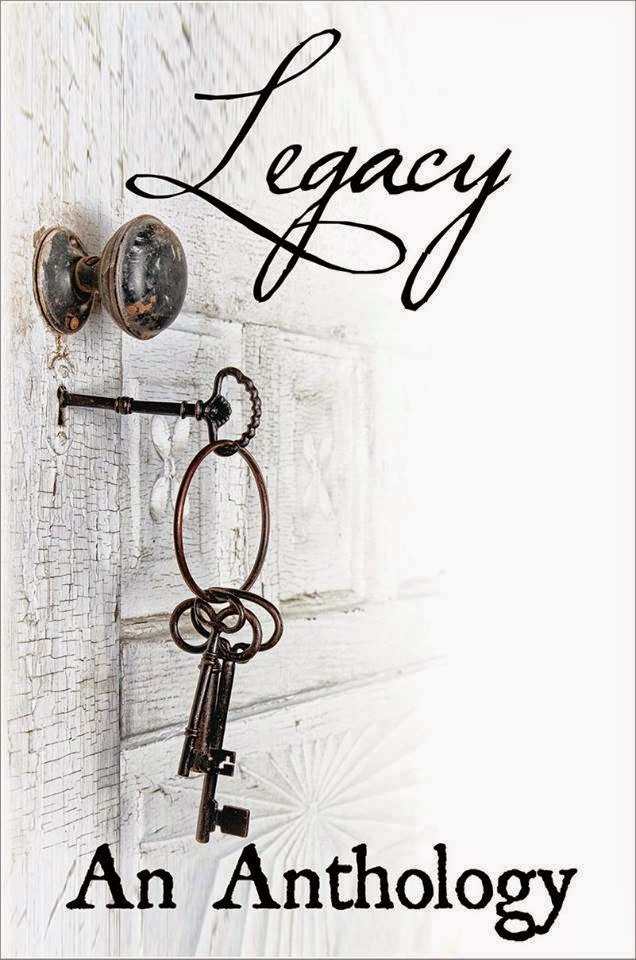 Today Legacy: An Anthology is out! What is Legacy? Keep reading!

In January 2015, Velvet Morning Press and the The Book Wheel blogger Allison Hiltz challenged fourteen fiction and nonfiction authors to sit down, shut out distractions and write on this transcendent topic, all the while Tweeting about their efforts. The resulting fiction and nonfiction stories fill the pages of
Legacy: An Anthology.

Within these pages, there is laughter, pride and hope. There is romance and rock and roll. Certain messages are eerie, while others bestow a sense of peace. The collection, through the discerning lens of each writer, runs the gamut of the human experience.

Legacy: An Anthology is available on Amazon. 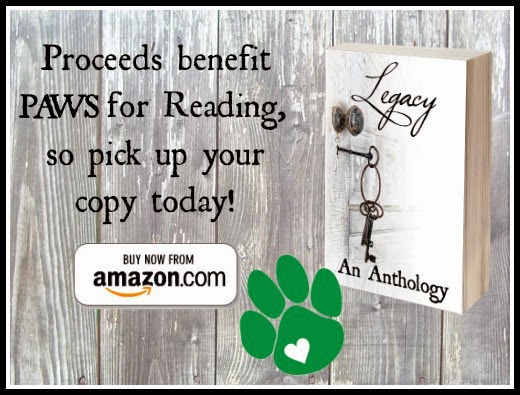 Paws for Reading
Author proceeds from anthology sales will be donated to Paws for Reading, a program that allows children to read aloud to a therapy dog (or cat, or bunny!) in order to improve reading and communication skills.

"Forget Me Not"
By Stephanie Carroll
Featured in Legacy: An Anthology

“You have to leave.”
Myrtle had me hooked by the arm, escorting me to the front door.
“But you’re my sister. They’re my nieces—my nephew. I only have three days left.”
She wrenched open the door and shoved me onto the front stoop. “No Lauraline, I only have three days left. Three days until this obsession and madness finally ends.”
I squeezed my purse with both hands. “I just—”
She pointed back into her house. “Your nieces are terrified of you. William’s crying. How could you tell them that?”
“They are older than we were.”
She clenched her teeth, balled up her hands. “Clearly you don’t recall what that was like.” She jabbed a finger into her chest. “I’m was older. I saw what it did to you—to all of us.”
I remembered my older sisters gasping and denying it, calling Grandmamma Silvia a monster and a witch for telling an eight-year-old such a thing.
“Someone had to tell them.” A part of me knew it was wrong, but I had figured Grandmamma told us against our parents’ wishes; although, she had waited until after their deaths to do so.
“You are turning thirty, not ninety, and clearly you haven’t gained an ounce of wisdom in that time if you think that was appropriate.”
I looked down. “Will you still come?”
She crossed her arms and pursed her lips. “No. We won’t be able to attend.”
I grimaced.
“Don’t worry. You’ll see us again.” She narrowed her eyes. “I will be sure to come by in—not three—but four days.”
I stood there on her stoop, pleading with my eyes, like I was still eight. “But—I’ll be dead.”
She clenched her eyes shut and pointed out to the street. “Lauraline, just go. Please.” She shook her head. “Damn Silvia for doing this to you.” Then she slammed the door.

I rode two streetcars and then caught the train out of San Francisco back to Colma. It was about forty minutes before I spotted the milky white of carved wings, rugged pillars and monoliths, obelisks, and rows and rows of tombstones. The fog had lifted and now hovered like a wool blanket in the sky. The moisture persuaded the grass and clover to turn exceptionally green this time of year, and it flourished among the dead. The train stopped at a few cemeteries before reaching my stop.
Colma is where San Francisco buries their dead. It’s a little unincorporated community just south of the city, close enough to visit by carriage, streetcar, or train. There are ten cemeteries already and talk of more because San Francisco passed an ordinance forbidding new burials within the city. All the dead come to us now. My grandfather was a sexton, and when he passed, my grandmamma said she had stayed in Colma to be closer to his whispers. Couldn’t I hear my father’s whispers, she had asked, but I never could.
I walked from the station, passing three cemeteries on the way to the house my grandmamma had left me after she died. I had little other choice than to occupy it, despite my sisters’ desire for me to move to the city. I wasn’t exactly frugal with the little I earned taking down headstone engravings, so the house is of some use.
Besides, I couldn’t abandon the place where we grew up, a place that had so much of our grandmamma entwined within in its walls. That’s why I insisted if they threw a party, they had to do it at the house. They had avoided the house as much as a newcomer avoids soft soil. They’ll forget Grandmamma when it’s gone—they’ll forget me too.
I stopped outside the iron-rod gate and stared at it, recalling how it felt to lay eyes on this house for the first time when I was eight years old. My parents must have avoided the house too because we did not see it until that dreadful day. To me, the house resembled a stack of decorative matchboxes stood on end, narrow and lofty as if it had wanted to rise above the clouds. A Belvedere tower loomed one level above the third story and had iron rods sticking up around the pointed roof. The doors and windows all stretched and thinned, and the wood carvings coiled and burst, manifesting puzzling ideas on the gabled pediments.
I looked over my shoulder across the street at what was the edge of one of the graveyards, an area of which had been left vacant since I was a child. In the winter, the fog concealed the tombstones in the distance, and the grass and little purple forget-me-nots almost had a luminescence against the white. Just once, I told myself, just once I should go over there, but I knew I wouldn’t. I had never stepped foot in that special place, not even as a child.
I turned back. After my sisters called our grandmamma a witch, I spent a lot of time hiding from her in the labyrinth that was her house. I slipped behind the secret doors in the paneling, played on the staircases inside the walls, and slinked around in the abandoned rooms. I used to skulk up the tower stairs into the attic and stare out the window, pretending that beyond the fog, the graveyard across the street was a meadow that went on forever. I used to imagine myself walking into the fog, disappearing into the endless white.

Read the Rest in Legacy: An Anthology available on Amazon.